Justin Sun recently took to Twitter to encourage developers to participate in the decentralized exchange that is now live on TronScan. This follows the announcement in September that the Tron Foundation would launch a decentralized exchange. In the tweet, Sun exclaims that the exchange is “going crazy”, and stated that Tron (TRX) is:

“hungry for new project(s) and tokens”. 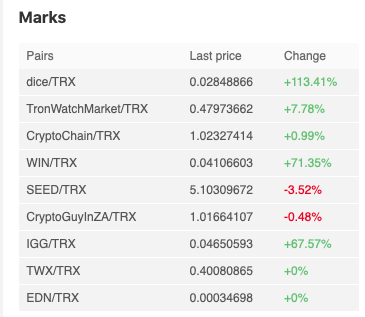 There are currently nine trading pairs on the decentralized exchange. The Dice/TRX pair, in particular, has seen a massive gain of 113.41% in the past 24 hours, as of press time. Other pairs include SEED/TRX and WIN/TRX.

The Tron Network has recently achieved the notable milestone of 1 million transactions per day. Mr. Sun commemorated the achievement in a tweet, noting that it had only taken 131 days to achieve:

Tron has been ramping up for some time now, as it broke from the Ethereum platform in June of this year. It has more than held its own, as it recently beat out Bitcoin, Ethereum, and XRP, in terms of daily transactions just several weeks ago.

There are many in the cryptocurrency community that believe that Tron will eventually be the
“Ethereum killer”, as Tron has hit a new block height of 4 million just several days ago. Mr. Sun also tweeted about this achievement, as well: