Almost three days after the hard fork on the Bitcoin Cash network, the question of which of the two chains formed can be considered that the winner still remains open. Asset trading on many exchanges is still frozen or goes under various tickers, while miners lose huge money trying to establish control over the blockchain.

As a result of hard forks Bitcoin Cash two competing chains were formed, which at this stage are called Bitcoin Cash ABC (BCH ABC) and Bitcoin Cash SV (BCH SV). Representatives of both camps at the same time were involved in the so-called “hashrate war.” And if at first, taking into account the additional resources that the Bitcoin.com pool allocated, it seemed that Bitcoin Cash ABC was taking over, at the moment there is no certainty that it will win the final victory.

At some point after the hard fork, the Bitcoin Cash ABC chain went ahead 50 blocks, but by Saturday this figure dropped to 11. Moreover, according to BitMEX Research, each of the parties only for the cost of electricity in the aggregate lost more than $0.5 million, that is, more than $1 million for two.

SV miners have estimated gross losses of around $397,000, compared to ABC miners on $365,000 of losses. Assuming electricity is the only cost. ABC has an 11 block lead overall.https://t.co/U9hbK4peip pic.twitter.com/MKpHmJ49SB

At the moment, the price of Bitcoin Cash also turns out to be quite a complicated situation. If we look at the CoinMarketCap data, then almost two days after the hardfork, the weighted average rate of this fourth token by crypto market capitalization dropped below $400 on Saturday, November 17. Thus, over the past 24 hours, the price of BCH has dropped by more than 4%, and over the past seven days, this figure amounted to almost 29% – the worst result in the Top 50 tokens by CoinMarketCap. Even after all of this happened to BCH, it is still in red on CMC. 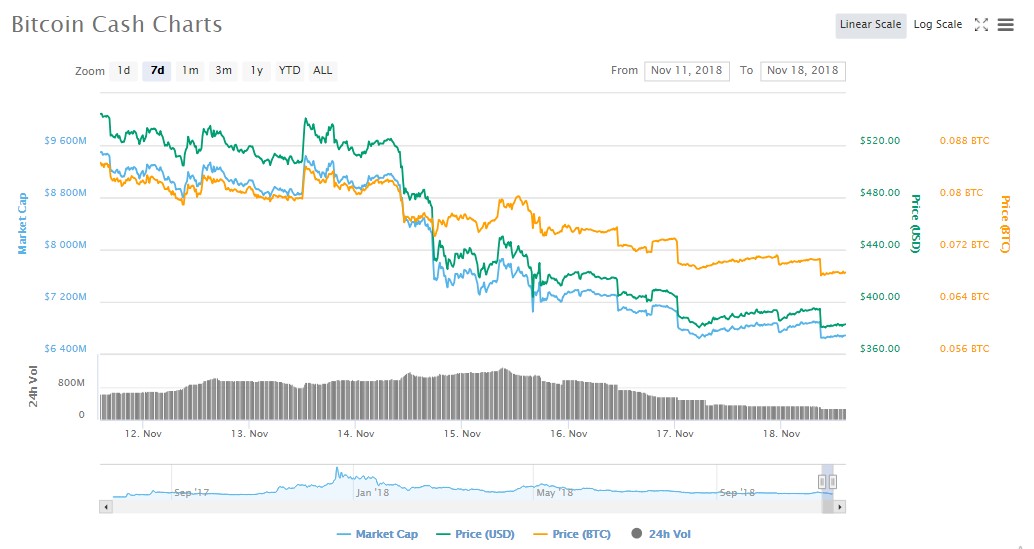 However, the objectivity of the data that CoinMarketCap currently displays is extremely difficult to assess. As you know, asset trading on many exchanges is still frozen or goes under various tickers (BCHABC and BCHSV). However, if CoinMarketCap shows the price in the region of $400, then on a whole number of platforms, it turns out to be much lower – on average in the region between $250 and $300. Also, questions are caused by the displayed trading volumes – $375 million in the last day

Many exchanges, including Kraken, Bitstamp, Coinbase, and Bittrex, have already managed to announce that they assigned the BCH ticker to the ABC ruleset. The list of exchanges that made this decision is available on reddit: Kraken, Bitpay, Bitstamp, Coinbase, Coinex, Bithumb, Upbit, Coinone, Korbit, Bitcoin.de, Bittrex, DMM, 50x, Voltaire, Mercado Bitcoin, and Southxchange.com.

The same decision, apparently, was made by the Binance exchange. At least that is what follows from the recent tweet of the head of the Changpen Jao exchange, in which he says that both tickers – BCHABC and BCHSV – will be preserved.

One thing about the fork, these symbol names will stay. Binance will not support changing of trading symbols later. If anyone asks for it later, let's refer them back to this tweet. https://t.co/j1h3gb4edQ

Thus, the BCH ticker, apparently, in the foreseeable future will become the property of history. The fact that for supporters of Bitcoin Cash ABC is “winning” the hash war and losing the BCH ticker, wrote, for example, the independent cryptocurrency researcher Hasu.

ABC "winning" the hash war and losing the BCH ticker.. is that what you call a phyrric victory

Also note that the developers of Bitcoin ABC saved another small “surprise” in the form of a previously unannounced control point, which was included in the client software several hours after the fork. According to Bitcoin Magazine, this checkpoint ensures that the first Bitcoin Cash ABC unit is included as a new protocol rule. Thus, any chain without this block will be considered invalid, and the inclusion of this control point really helps in many ways in the “hashrate war”. However, it is also quite contradictory, since it implies a certain central control on the Bitcoin Cash ABC blockchain to the Bitcoin ABC development team – while in the traditional model the nodes usually follow the longest valid chain, this control point implies a possible change in the consensus mechanism.

Users, of course, can make their own choices regarding software and opt out of a Bitcoin ABC version with this reference point. This, however, creates the risk of another division of the chain – conditionally on Bitcoin Cash ABC Checkpoint and Bitcoin Cash ABC Classic. At the moment, according to forkmonitor.info, the implementation of such a division would cost almost $1 million.

In the meantime, despite the fact that Bitcoin Cash ABC supporters seem confident in their “victory”, many Bitcoin Cash SV supporters refuse to admit the defeat. So, one of the main ideologists of Bitcoin SV, Craig Wright recently wrote that a hashrate war is a marathon, not a sprint.