It may appear minuscule for the world’s largest crypto exchange by trading volume to invest $3 million in an OTC trading firm, Koi Trading. But in the grand scheme of things, this is a step in the right direction. Everything else constant, Koi Trading is providing solutions for investors and even traders from countries without access to crypto exchanges—banned or otherwise and to individuals or funds who want to build their crypto holding without significant price swings associated with exchanges.

By being a compliant and reliable trading desk providing private liquidity for crypto assets including Bitcoin Cash, Koi’s objectives sync well with those of Binance and their desire to bridge crypto and fiat by building bridges for seamless exchange of value.

While Binance Labs invested in Koi, Bitmain made a $20 million investment in Washington opening up a data center at East Wenatchee, Seattle. Despite the BCH capitulation partly caused by Bitmain involvement and drumming for Bitcoin Cash ABC, Jeff Stearns, Bitmain’s director of operations for North America said the company shall continue with their Bitcoin investment insisting that the current bear market is a huge opportunity for their business.

Even as Bitmain continue increasing their footprint in the US employing hundreds, the hash rate ware between ABC and SV continue dragging their name Calvin Ayre of CoinGeek, a mining pool say the ABC network which has support from Jihan Wu—the co-founder of Bitmain cheated by diverting all the hash—including that meant for BTC to support the ABC network. It is because of this that he wants a permanent split. 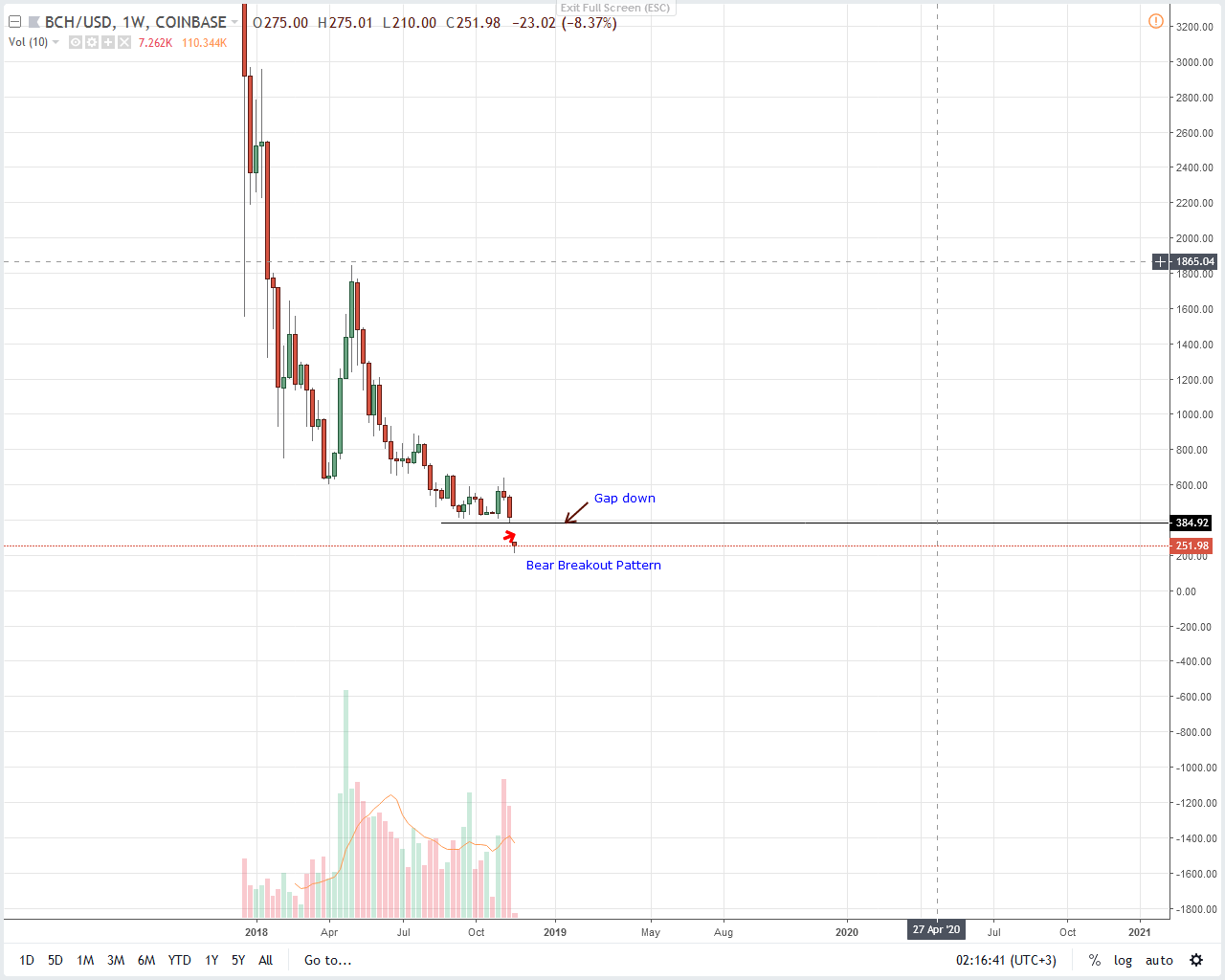 Dropping 55 percent in the last week, BCH is one of the largest losers in the space and the consequence is clear. Aside from the temporary XLM/BCH flip, BCH/USD prices are now trading at almost half their pre-hard fork valuation. At $240—at the time of press, BCH is obviously grappling with losses and trading within a clear bear breakout pattern with $400 now acting as resistance.

Now, as laid out in our previous BCH/USD price analysis, we had said losses below $400 could trigger a meltdown that will drive prices towards $250. Since our targets have been met and neither ABC nor SV seem to be backing out despite losses, we expect to see further losses. Therefore, conservative traders should short on pull backs in lower time frames and let the trade roll. 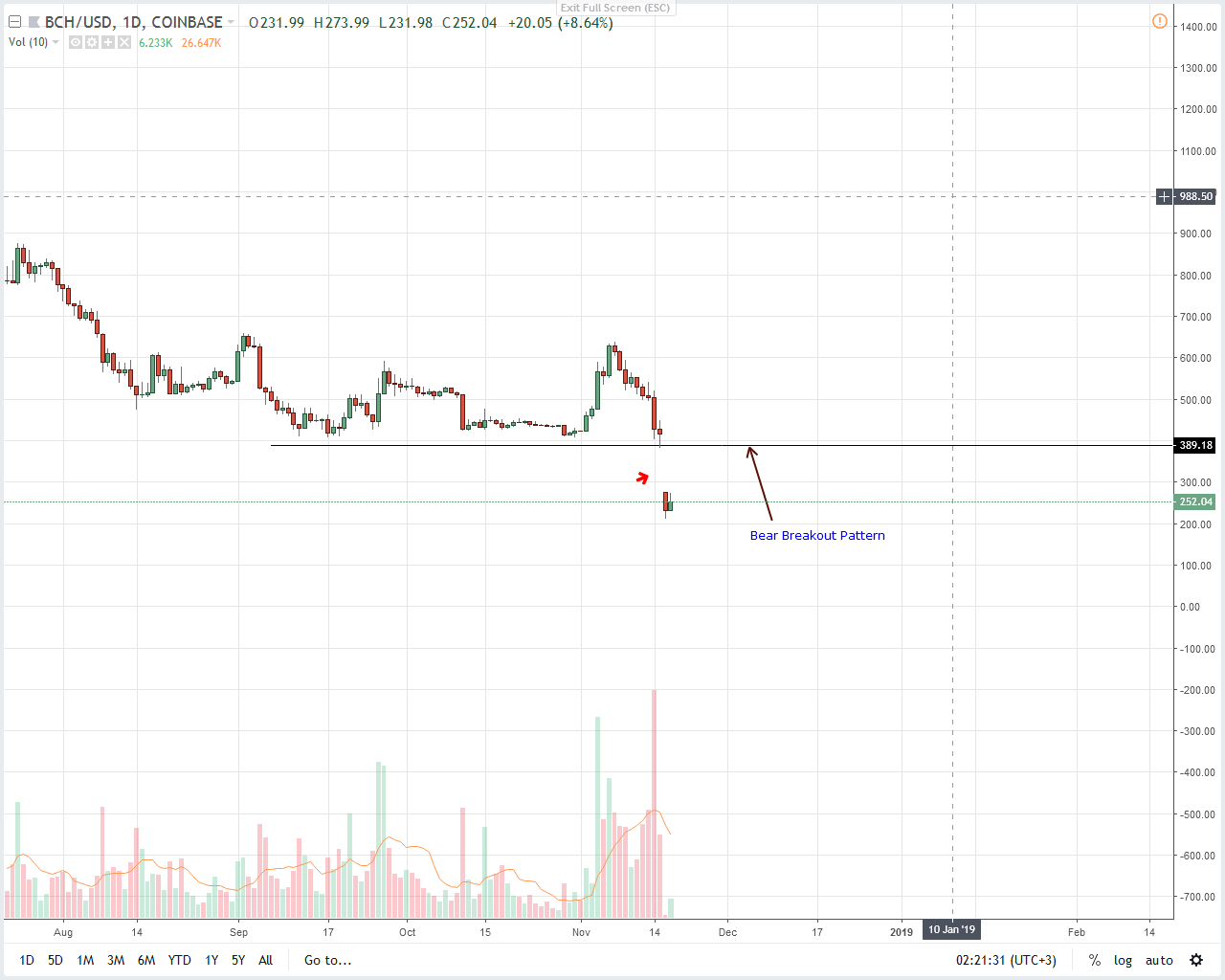 It’s a classic bear breakout pattern as the events of the daily chart shows. Like similar historical price patterns, we expect a rebound and attempts of BCH/USD bulls to retest $400—the breakout level. Though this is a long shot, we cannot discount that from happening more so if it appears ABC is winning and SV is losing ground in terms of hash rate and the number of full nodes in operation.

As aforementioned, every pull back is another shorting opportunity with stops at $400 and targets at $200 and later $100.

Alternatively, and this is a more conservative approach, traders could only place shorts once there are solid moves below Nov 2o lows of $200. In that case, stops would be at $250 and targets at $100 or lower.

All Charts Courtesy of Trading View

Disclaimer: Views and opinions expressed are those of the author and aren’t investment advice. Trading of any form involves risk and so do your due diligence before making a trading decision.

Dalmas is a very active cryptocurrency content creator and highly regarded technical analyst. He’s passionate about blockchain technology and the futuristic potential of cryptocurrencies and enjoys the opportunity to help educate bitcoin enthusiasts through his writing insights and coin price chart analysis.

The Real Drive Behind the Crypto Markets is...

Why do we need market makers and what...

From Telegraph to Bitcoin and Libra: A Brief...

Bitlish Was Invited to Join Her Majesty’s Treasury’s...